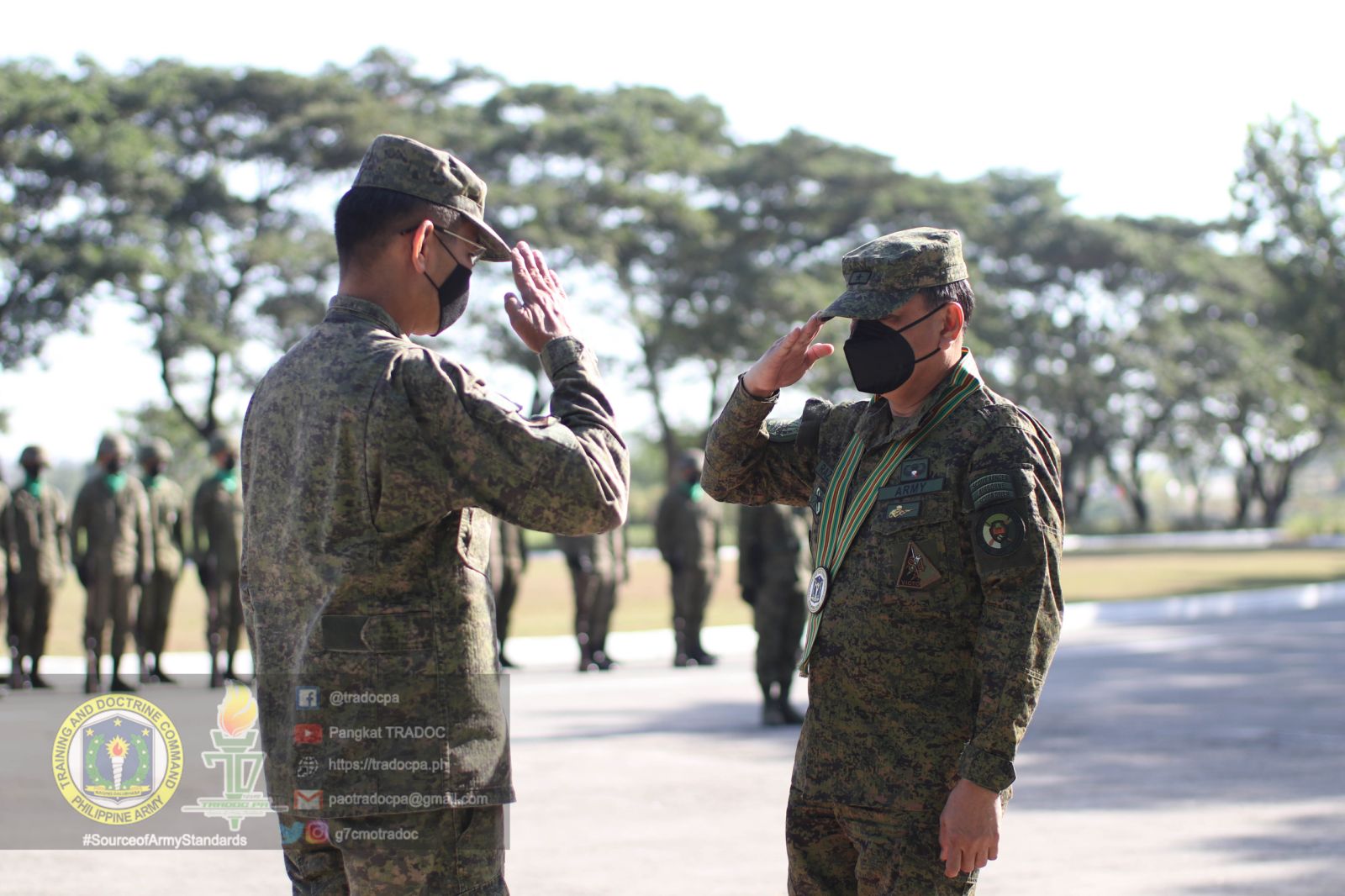 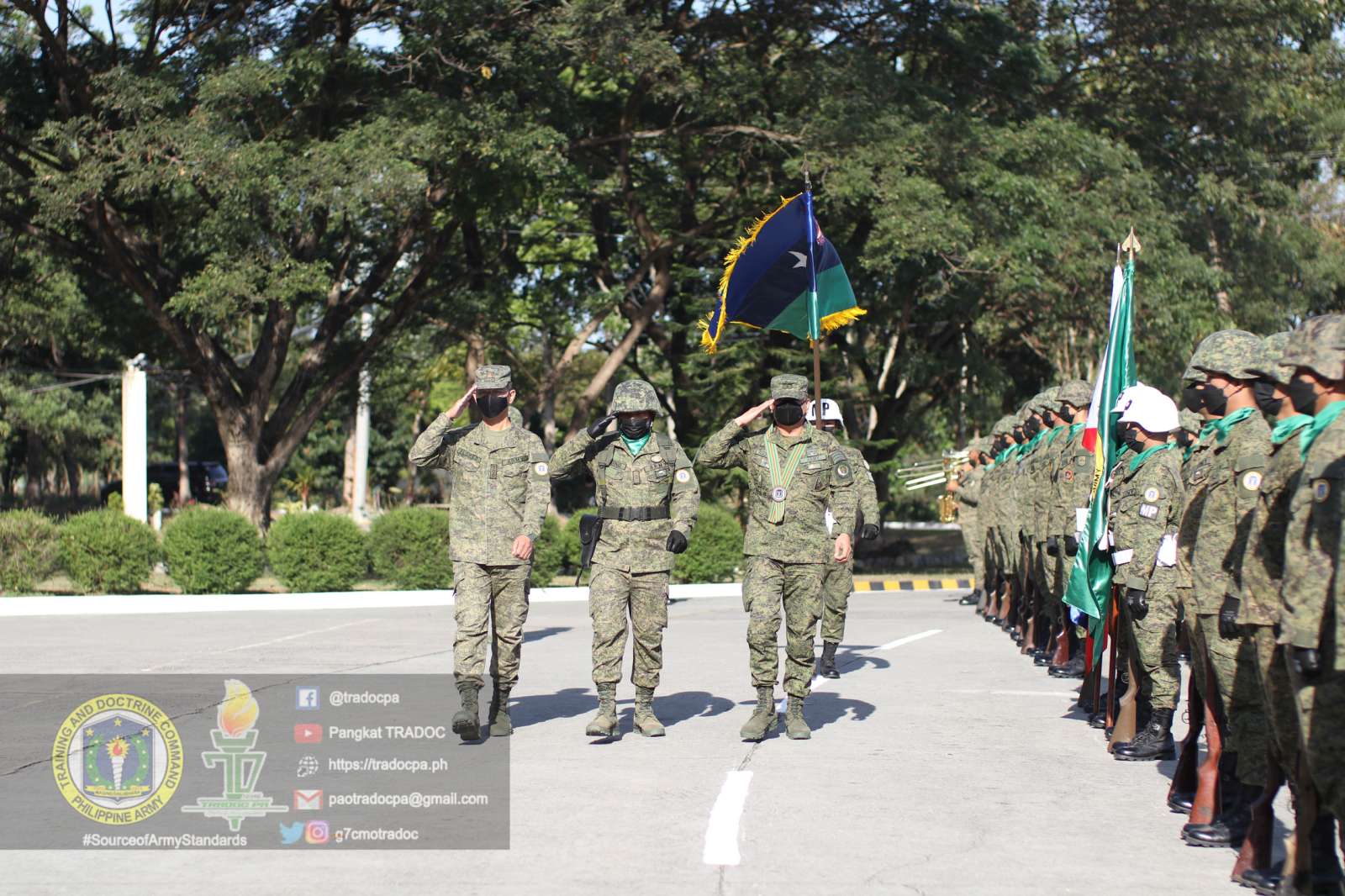 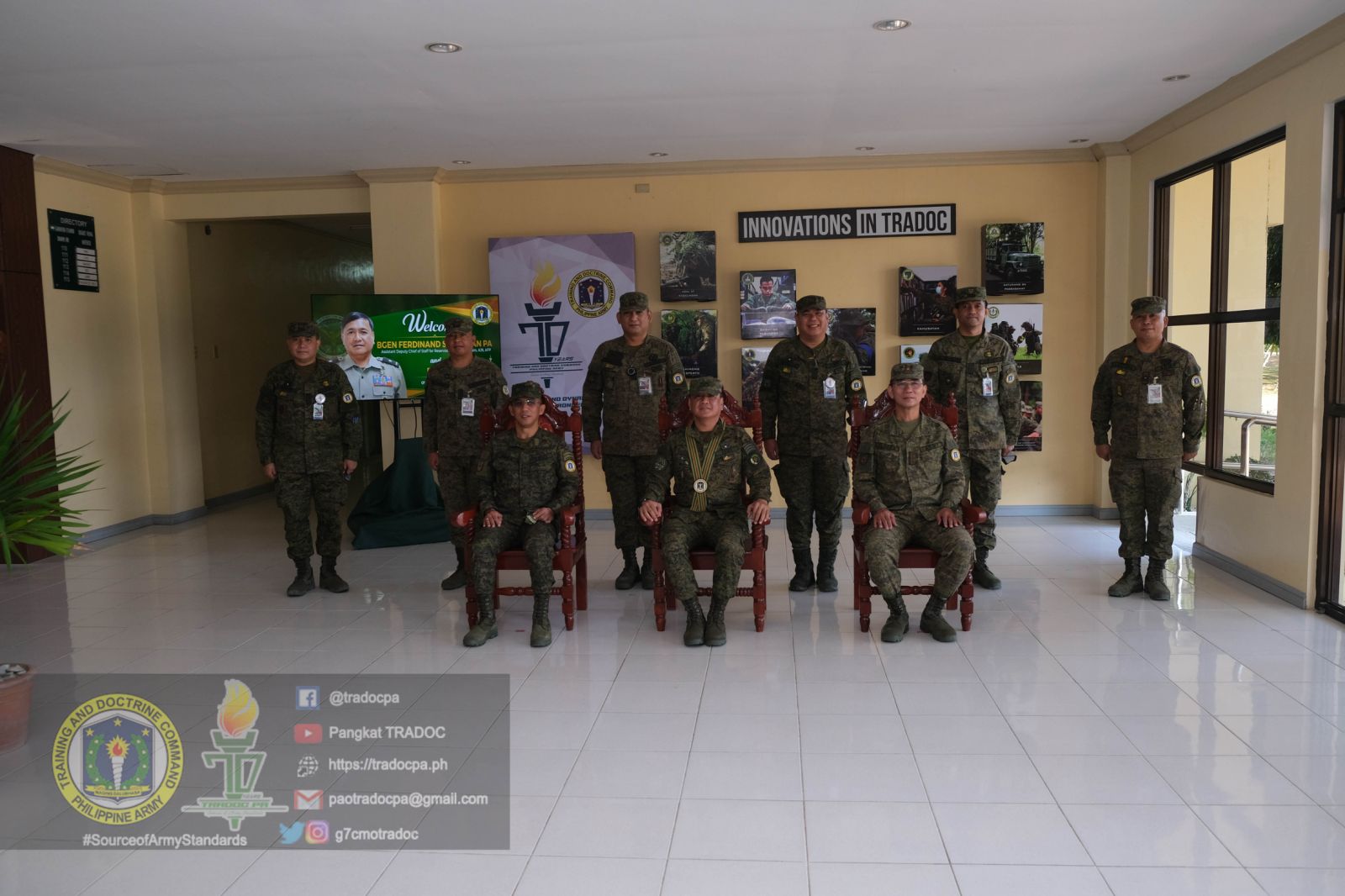 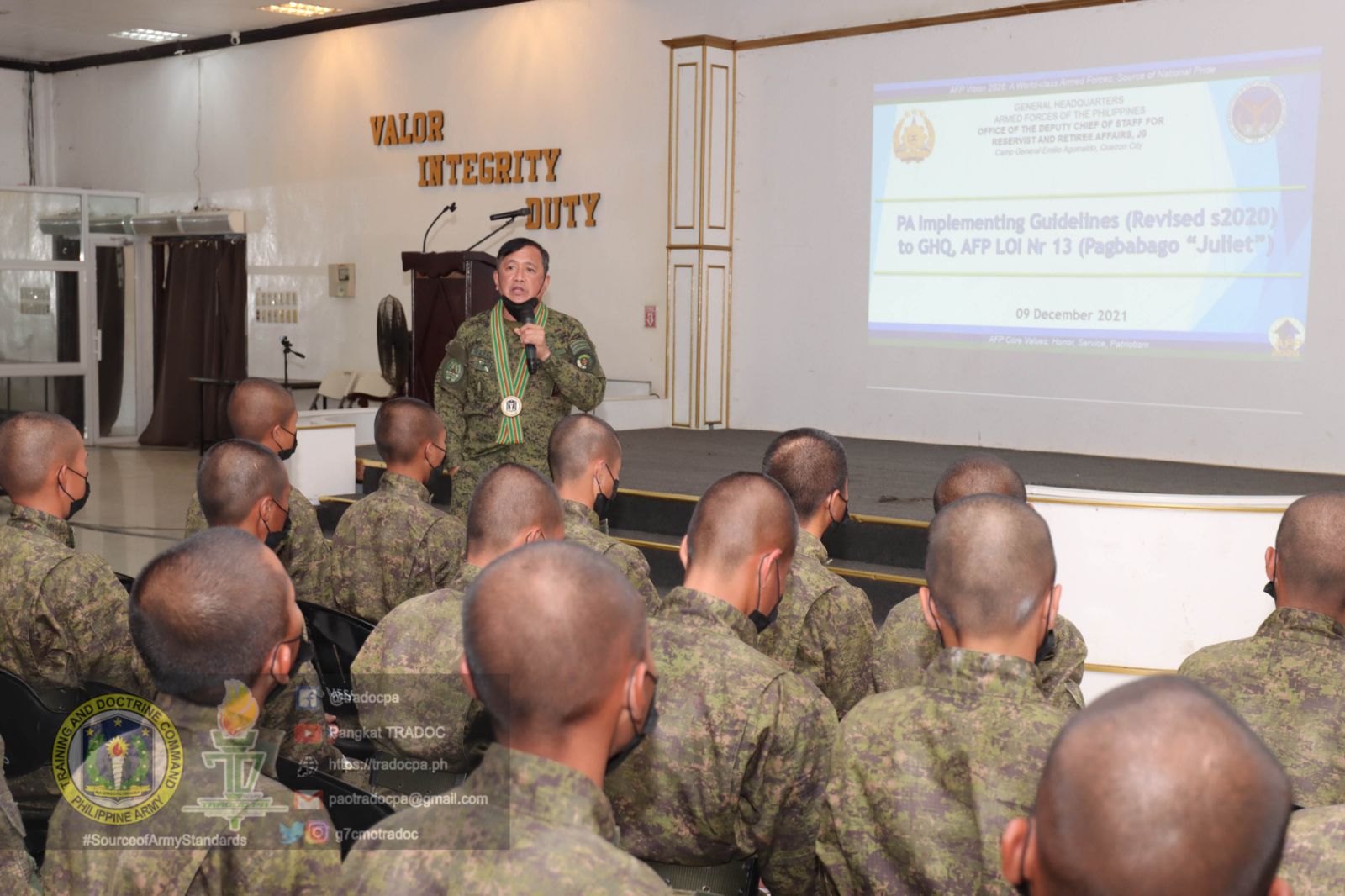 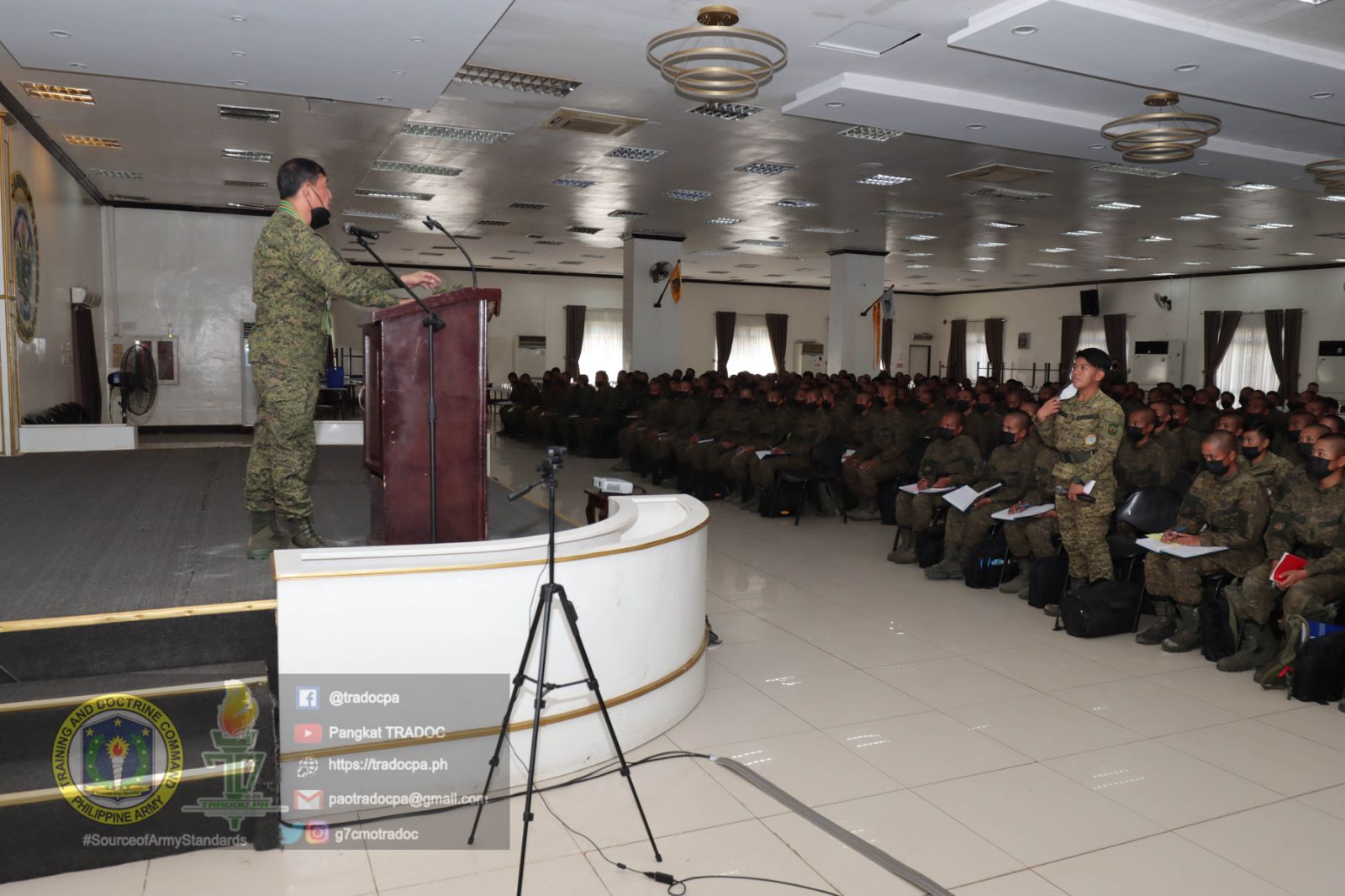 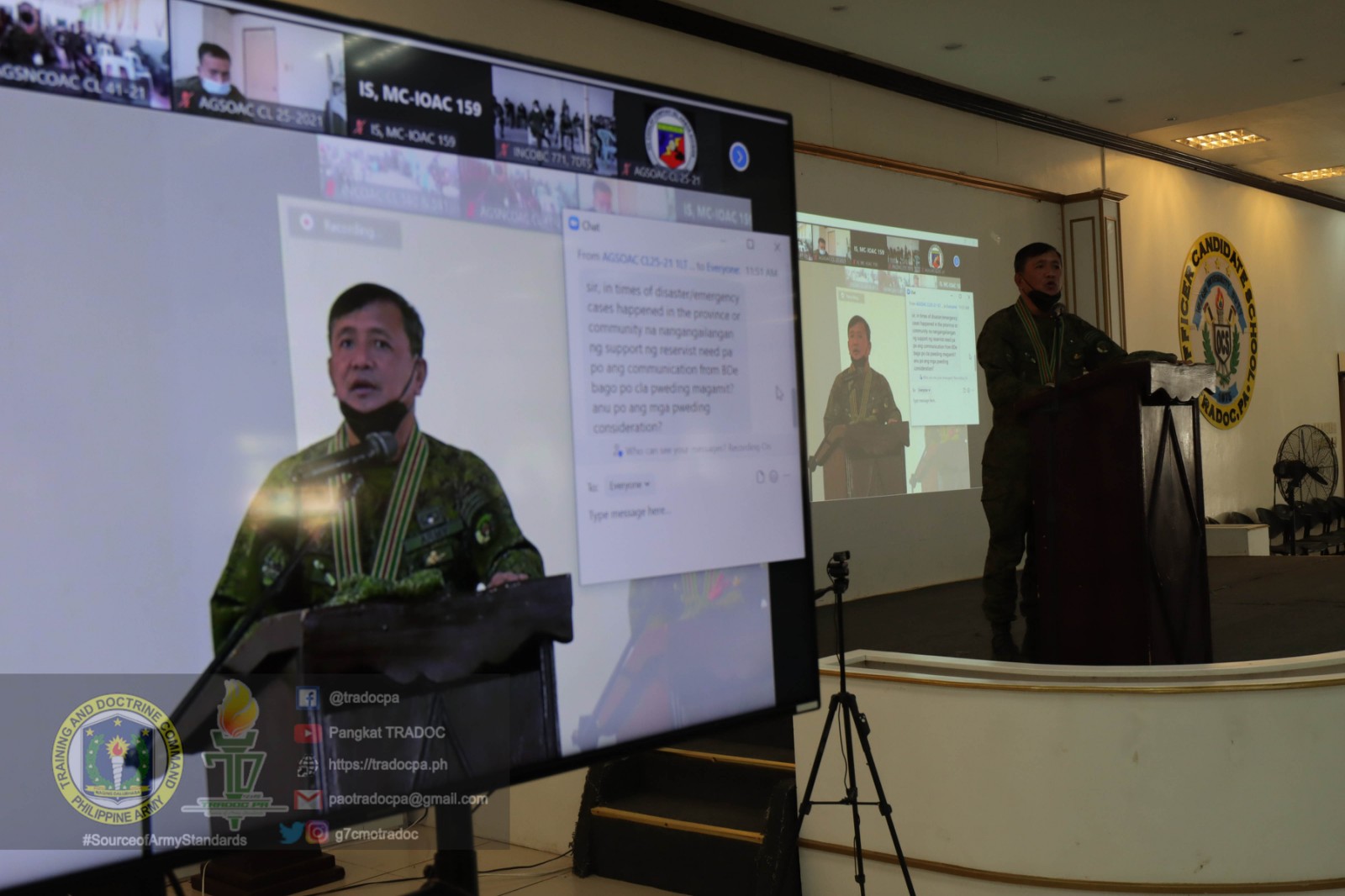 During his visit, BGen. Razalan conducted a lecture physically to officer candidates of Officer Candidate School (OCS), TRADOC, PA which was also attended by the students of 3rd Training Cycle, both officers and enlisted personnel virtually regarding the Regional Community Defense Group’s (RCDG) Command Relationship with Infantry Division in relation to the PA’s Reserve Force Development.

“Reserve Force Administrators (RCDGs) are attached to the component Commands/Infantry Divisions. Ready Reserve Units (RRUs), Army Reserve Units (ARUs), and Reserve Officers' Training Corps (ROTCUs) are assigned to the RCDGs/CDCs. Utilization of RUs and Reservists shall be in accordance with RA 7077. Commanders, RCDGs may attach the RUs to organic Community Defense Centers (CDCs); and once mobilized, RUs shall be attached to the Infantry Division and may be utilized as combat, combat support, or combat service support units depending on the type of the organization of the concerned RU.” BGen. Razalan emphasized during his lecture at OCS.

The lecture is very timely for all the students of TRADOC to thoroughly understand the contribution of the reserve force in the defense of our country.

Strict observation of IATF covid protocols were implemented during the entire activity.

On the same day, the Armed Forces of the Philippines, Sergeant Major, FCMS Aladin S Dacayanan, made a series of visits to HTRADOC in which a talk to enlisted personnel was made at Macabulos Grandstand where he gave some advices and insights on how to become role model soldier as a source of national pride. After which, FCMS Dacayanan proceeded to School for Candidate Soldier to check status of Candidate Soldiers undergoing Basic Military Training. AFPSM also lend some time to Philippine Army Sergent Major Course (PASMC) students of NCOS, ALDEC, TRADOC, PA, in empowering them as model senior NCO’s, handling its unit subordinates.